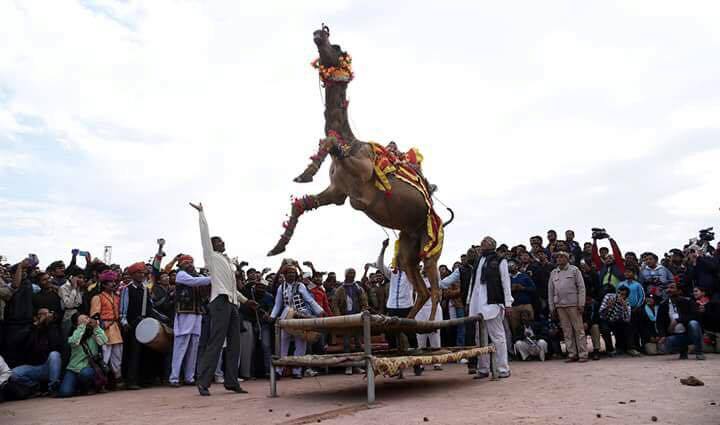 Rajasthan is known for its mix of cultures, temples, forts, palaces, food and folk traditions, but personally, it has always fascinated me because of the quality of sun and the colours. There are always new and exciting nuances waiting to be discovered at every corner; a journey through this northern region of India is a vivid psychedelic treat for the senses. Rajasthan is a microcosm of all things that define my beloved India.

There are two things one cannot overpass in Rajasthan and around the sandy Thar Desert: moustaches and camels. One day I will tell you the story of clueless me in the middle of the night dealing alone with a dead car, and a crazy driver on a dusty road somewhere between Jaipur and Delhi and how I was saved by two camels and three most kind and hairy men wearing what it seemed to be a jungle in their faces. Facial hair is considered a symbol of virility and Rajput pride, the moustache especially. 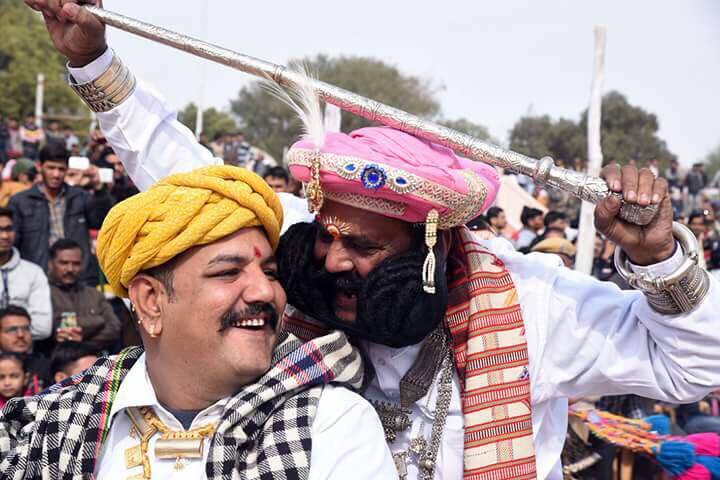 Camels in India are actually single-humped dromedaries. It’s not easy to ride them, let alone get along with them. I wonder how on earth Bikaners manage to control such phlegmatic and obstinate animals and put them to dance, because that’s exactly what happens every January in the small village of Ladera, which becomes the venue of the two-day and night Bikaner Camel Festival. The smelly dromedaries dance swaying their necks and tapping their feet to the beat of traditional Rajasthani music, which I tell you, as mesmerizing and simple as it may sound, it is extremely complicated.

Camels and owners alike dressed in their finest designer jewellery and accessories, kick-off the celebrations with a regal march. This is a spectacular sight as the camels parade past spectators to the open sands with the Royal Junagarh Fort in the background. Colourful bridles, bejewelled necks, jingling anklets and long, lanky camel shadows on the dusky sand casts a magical atmosphere over the city. The festival also holds numerous sports and cultural activities, but the camel race is maybe the essence of it. Hundreds of camels are corralled to the starting line, and with an explosive gunshot launches a growing swell of dust that follows the camels to the finish line. The camel milking competition is another very popular game among the locals. For foreigners like me, who abhor milk of all sorts, this is pure nightmare. In the evening though, the jubilant skirt swirling and awe-inspiring fire gypsy dances and folk songs fully compensate for the daylight milky horror.

However, the formerly known Princely State of Bikaner has a lot to offer besides camels. It also has impressive architecture treasures, e.g. the Lalgarh Palace, which was built by Maharaja Ganga Singh. The Palace is an example of hybrid architecture combining Mughal, Rajput and European styles. The exterior of the Palace is very Rajput style, while the interiors of the Palace are distinctly oriental. One can also see the Usta art here in which miniature paintings and gold embossing is done on camel hide.

I am now sharing with you some pics my Rajasthani friends sent me last weekend. I wish I could’ve been there with you folks, but this time my travel plans had to be postponed up until May 2017. Enjoy!!!!

Two years ago I was invited to Mextrópoli, the first international congress for architecture organized by Arquine. I was well prepared to reconnect with several colleagues and acquaintances, but certainly not with Bijoy Jain. I was introduced to part of his work in 2013 during a short trip to India, but I had never heard him talk about Astrology and that alone made the conference worth. This renowned architect shocked an overcritical audience speaking about Monsoons, the Sun, the Moon and how these and other celestial bodies had influence on the way he works. Equally enthralling was the part on how he conceived space in Indian terms. Right in the middle of the conference I caught myself thinking: What’s the chance of a contemporary architect taking seriously the astral movement? What’s the chance of Alibagh coming to Mexico? Statistically maybe .000000001%. Lucky me.

Jain humbly presented the working methods at Studio Mumbai, a collective of architects and Indian craftsman residents, led by him in south Mumbai. Studio Mumbai’s work is based on the act and process of constructing, on the idea of working collectively within the spirit of a workshop. It works with a human infrastructure of skilled artisans, technicians and draftsmen who design and build the work directly. This group shares an environment created from an iterative process, where ideas are explored through the production of large-scale mock-ups, models, material studies, sketches and drawings. Projects are developed through careful consideration of place and practice that draws from traditional skills, local building techniques, materials and an ingenuity arising from limited resources. Here ideas take form through a shared dialogue capable of integrating the thinking and making of architecture; an architecture that, without being self-referential, transforms thoughts into construction.

One can freely say that Bijoy Jain is a revolutionary in his own right. Many architects pay lip service to a building’s environment and local materials. Jain makes these his mantra so that the finished building doesn’t impose itself on the environment and the surroundings, but becomes part of it. It’s a singular achievement because this central idea runs constantly and rigorously through all of his work.