The path out of hell is through misery. By refusing to accept the misery that is part of climbing out of hell, you fall back into hell”. — Marsha Linehan

Please someone stop this guy from tweeting; stop the non-sense. People, don’t get me wrong I usually maintain a sunny outlook of things even in my darkest hours. It was me who always said everything is going to be all right. But you know what? Sheer optimism is not the solution here; it’s a handicap. I believe we should face the fact that there are tons of things beyond our control and that we are in deep shit. It doesn’t mean we condom what’s going on, quite the contrary. But it is my conviction now that we would do better if we accept the truth and move forward, rather than paralysing ourselves with shock and outrage. I don’t want to waste my energy anymore getting riled up by abject tweets, despicable behaviours and ridicule declarations; we help no one staying angry or distressed.

Let’s do something wise and proactive instead; compassion, love, and affirming values exist because people intentionally work toward them. Let’s shift our focus to what is most immediate and most helpful; focus on i.e. the work of fighting for human rights and accountability. And I encourage you to be kind to others even the ones you don’t like. Make an effort, take a step towards the good and allow you to grief and know that from time to time it’s OK to freak out and vent for a while. Then go back to work, as always for the good. We are traveling a long road toward change, but we will play the long game.

On March 20, 2014, The New York Review of Books published this poem with the article “India: You’re Criminal if Gay,”. The article was written by the poet’s mother, retired High Court Chief Justice Leila Seth. The trigger was the Indian Supreme Court’s killjoy re-instatement of a colonial anti-sodomy law that had been revoked in 2009. Vikram calls this “to undo justice.” His mother affirmed her love for her bisexual son and wrote: “The Supreme Court judgment means that he would have to be celibate for the rest of his life or else leave the country where he was born, to which he belongs, and which he loves more than any other.” Thus Seth divides his time between Delhi and a home in England that belonged to Metaphysical poet George Herbert, whose 17th century language echoes in this poem.

Just when one thought Donald Trump supporters couldn’t get weirder, they just did. A group of Indian-Americans formed this year a political action committee to support the creep. They call themselves Indian-Americans for Trump 2016 and their campaign is founded on the belief that the Republican-frontrunner would make the best president not only for America as a whole, but especially for the American Hindu population. The group claims Trump’s bigotry targets only the less-educated and Muslim members of the American community. Therefore, as Hindus, this group believes they are advantaged by Trump’s policy proposals. Oops!! Good luck with that guys.

But wait, as if this were not enough, the group has taken some creative license with its logo, which features a meditating Trump upon a red, white, and blue-coloured lotus as if he was Lord Vishnu. C’mon, really? Outrageous. But the group has defended their “artwork” by drawing comparisons to similar campaign posters used in Indian elections. Geez!!

Many questions come up to my mind right now. Why this group of Hindus chooses to support Trump on account of their Hinduism? Look guys, as far as I know, none of the “reasons” you have published align with or relate to Hindu ideology. This is pure ignorance, a great example of how the cult of American anti-intellectualism is finding its moment in the Republican presidential campaign of Donald Trump.

The U.S. is unique in many ways. One of them is a well-documented streak of anti-intellectualism, which has long suffused large parts of its society, including of course immigrant population. Remarkably for a country, which dominates the rankings of world-leading universities and produces far more than its share of Nobel laureates, large parts of the U.S. mainstream have long been proudly benighted.

One encounters it frequently when talking to some Americans about issues such as let’s say, the Middle East. They begin their rant with “Well, I’m no expert, but it seems to me that ….” They use the “I’m no expert” line proudly as a way of saying that they are not contaminated by any actual knowledge and can therefore cut through the crap and do what’s “right.” There is a view that deep knowledge of a situation just makes you incapable of “solving” it, whereas a “common sense” approach, based on good old American values, will get it done every time.

Trump’s supporters are the kind of guys who believe such things as the notion that dinosaurs and humans inhabited the planet at the same time, despite all evidence to the contrary. Indeed, such people think of this as “so-called evidence,” and proof of a conspiracy by intellectuals to rob American society of its spiritual values.

And these Indian-Americans seem to be a bit lost. How gullible can you guys be? Do you guys honestly think that Trump can tell the difference between a Muslim, Hindu, Parsi, legal or illegal? You’re just more brown people for him and his horde of white supremacists. Period.

God of peace, have mercy on us all.

Throughout history Indian culture has been subject to a myriad of different influences, from the Mughal Empire to the British Raj to the now globalized nation in transition. To all those who’d like to find out how these influences have fit into the lives of Indians and moulded the national character, I strongly recommend “SAR: The Essence of Indian Design. An exploration of the timeless beauty of Indian Design through 200 classic objects”. In this book, the artist and curator Swapnaa Tamhane and the designer Rashmi Varma explore the elements that make Indian design so special, including the varied manufacturing and decorating techniques of the country’s incredibly skilled craftsmen, highly specialized object designs that have been refined over centuries, and on-going responses to nature, technology, and necessity. The objects were chosen for their enduring quality and beauty, and their integral connection to Indian culture. Here my take on two of them:

This simple white cap, a bit like an upturned boat was made popular by Gandhi during the South African Indian passive resistance struggle of 1907 to 1914. Gandhi and other jailed Indian protestors were obliged to follow the dress code of black prisoners, which included the cap that Gandhi was to make his own. When Gandhi returned to India, he adopted the custom of wearing clothes made with homespun “khadi” cotton. Along with the use of Swadeshi goods (as opposed to those manufactured in Europe), the attire represented his message of cultural pride, self-reliance and solidarity with India’s rural masses and a symbol of non-cooperation against the British Raj.

The suave Jawaharlal Nehru (photo), India’s first prime minister habitually wore a smart version of the Gandhi cap; so did several of his successors. But over decades, it faded out of fashion; regarded as dated and distinctly uncool the topi vanished. However, good stuff never dies, only transforms: it is now back in style – and indelibly associated with the upstart force in Indian politics, the anti-corruption Aam Aadmi (common man in Hindi) Party.

Designer Ravi Bajaj, who showed colourful polka-dotted and moulded versions of the Gandhi Topi in his fashion show this year, says that it makes a strong statement on the ramp. “I wanted people to look beyond sheer symbolism; so I paired them with tailored suits. It was a rebellion of sorts,” he admits. Other fans include Sabyasachi Mukherjee and Tarun Tahiliani.

From humble headwear to haute couture, from political emblem to style accessory, the Gandhi cap has undergone quite a transformation, I guess very much according to the sign of Indian times. 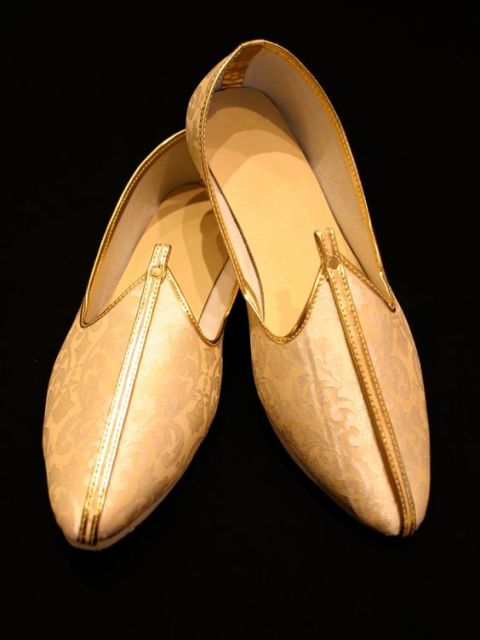 Introduced to India by the Mughals in the sixteenth century, the mojaris (closely related to jutis), traditionally with distinctly pointed toes and flat soles, have evolved into many styles, with production clusters throughout the country. Mochis — shoemakers of Jodhpur (a popular area for making mojaris) — use soft cow, goat, camel or buffalo leather for the uppers and hard leather for the sole, moulded round a three-piece wooden cast. Densely embroidered uppers in bright colours, made in thread work, zari (metallic thread), wool and leather cut-outs, are common, although plain, unembellished leather shoes are worn by Rajasthani farmers, for example. The soles are attached using a thick, white-cotton chain stitch and there is generally no distinction between the left and the right foot. In general, men carry out the leatherwork while women freestyle with the embroidery. Worn by both men and women, mojaris have become extremely popular in recent years, especially for weddings and occasion wear.

SAR: The Essence of Indian Design. An exploration of the timeless beauty of Indian Design through 200 classic objects. http://www.amazon.com/Sar-The-Essence-Indian-Design/dp/0714870501